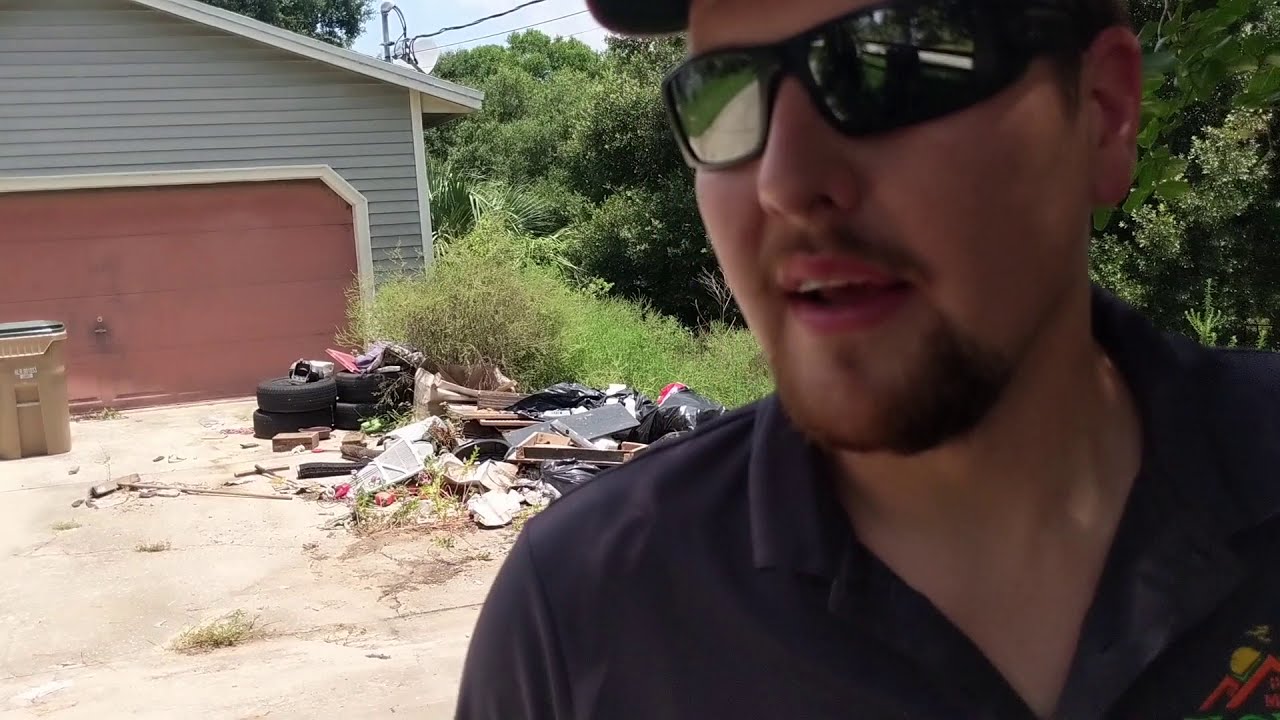 Selling An Inherited House In Central Florida BEFORE Probate

Hi, this is Matt with My Florida Home Buyers, and I’m standing outside of a house here in Tavares that we actually just purchased. I wanted to take you through this house because this was a probate deal. This was an inherited house in Central Florida, and the sellers contacted us to see if we could buy it from them as is. All of the heirs lived out of the area, and they didn’t have time to come and clean up the house, even empty it out. I’m going to show you that in a second how full of stuff this house is. They didn’t want to make the drive to have to maintain the property, cut the grass. Also, there were two, not one but two mortgages on this property, so they were paying two mortgages on a property that they inherited. Basically, when it came down to it, it was better for them to actually just sell the house to us because now, they’re not going to have to deal with all that.

Another thing that we were able to do for these particular sellers is we actually purchased the property before it went through probate. Then, we’re going to actually going to quiet the title on our own now that we have purchased the property. So, that’s going to save them thousands of dollars. That’s going to save them time and money. A probate case takes at least 90 days. That means 90 days of mortgage payments, of mowing the grass, of maintaining the property, paying the electric bill, insurance, things like that. Now, they’re not going to have to do that. That’s all our problem now. So, I’m going to take you through the house, and I’ll show you what’s going on, and I’ll discuss some other things that might come up when you’re selling your house in probate or a house that you’ve inherited in Central Florida.

All right, so we’re walking inside the house now. The first thing you’re going to notice is there is stuff everywhere. Basically, what happened in this situation was the sellers, like I said, they were out of the area, this was an inherited house in Central Florida, and basically, one of the big benefits of selling to us is they were able to come take what they wanted, leave what they don’t want, and we’ll actually make sure that this stuff either gets trashed or that it gets donated to a local charity, so things like the furniture. Some of the furniture is still good. There’s actually a piano over here. Stuff like that doesn’t need to go to the dump. Actually, it can be donated to a charity, and they can actually hopefully make some money on it.

Consider Repairs And Updates On An Inherited House In Central Florida

Now, I’m in the kitchen, and you can see this place is pretty outdated, needs a lot of updates, doesn’t look very appealing. Most buyers nowadays, it’s not like it was in 2017, 2018. Now, we’re seeing buyers get more picky, and they want the kitchen to look like it does on Pinterest. This house is going to be a tough sell like this, so, a lot of times, when you inherit a property, it’s going to be really outdated. A lot of these houses that we find that we’re buying in probate or buying from people who inherited them in Central Florida, these houses haven’t been touched, haven’t been updated in 50 years. I think this house was built in the ’70s, and it clearly has not been updated since the ’70s. You may have problems selling a house when it’s super outdated, and all the other houses around that are selling are actually updated. They have granite countertops, they have nicer cabinets, nicer fixtures. This kitchen is actually kind of an old style and the fact that it’s all closed in. So, our first thought was, let’s knock down some of these walls and open this thing up.

Another thing is you may not have the money to actually put into the house to make the repairs. I’m going to show you a deck out back here, and this deck has to be repaired or else, this house will probably not qualify for financing. It’s an expensive deck, and it’s a second story deck and really expensive to replace. So, unless you’re willing to put the money into the house, if you don’t have the money, you don’t really have an option here because if you list this house, no one’s going to be able to get financing on it. It’s going to sit on the market forever. You’re going to have buyers come through. They’re going to nitpick over all the cabinets and all of this stuff that’s out of date. They’re going to expect all this stuff to be cleaned up. You’re going to have to come through and clean all this stuff up.

You don’t have to worry about that when you sell it to us. We’ll take care of the updates. We’ll buy the inherited house in Central Florida as is. We pay you cash. You don’t even have to clean it out like these folks didn’t. They just sold it to us as is, and now, they have their cash. They’re done with the property. They didn’t even have to go through probate like I said earlier because we actually, in this particular situation, we were able to buy the property without going through probate, and then we’ll quiet the title once we own the property. So, we saved them the time and expensive probate. So, give us a call if you have a house that you’ve inherited. We might be able to help out.

Now, I’m down here in the basement of this house, and yes, that’s right. This Florida house has a basement. It’s actually a walkout basement. The house sits on a hill, so it’s pretty unique. We don’t deal with basements a whole lot, and as you can see, this basement is not finished. This thing is completely unfinished. It’s not living space. There’s no heat and air down here, and you can just see, it is packed to the brim with stuff, and it’s probably 1,500 square feet down here. It looks like this over the entire 1,500 square feet. There is a lot of stuff down here. These people kept everything basically and used this as their storage area.

Sell Your Inherited House For Cash And Avoid Financing Problems

I’m in the backyard of the house now, and this is the deck that I was telling you about earlier. This is the reason that this house is not going to qualify for any sort of financing until this deck is fixed. It’s basically falling down. The steps are falling off the side of the house. All of the support beams are … It wasn’t done correctly in the first place, and everything … It shows. Everything is just falling apart. I’m even scared to get up there and walk on it because it moves, and there’s boards that are breaking through, stuff like that.

In this situation, if you inherited this house, you basically have to come through and either fix this deck or else, this thing is not going to qualify for financing, especially FHA, VA. No one’s going to give anyone a loan on this house until this issue is fixed. Big things like this really hold up financing for houses. So, what we’re going to do is we’re going to come through. We’ve already purchased it from the previous owners. They didn’t have to deal with any of this. We paid them cash. They didn’t have to fix the deck at all. They walked away with their money. They’re done with it. It’s no longer their problem. We’re actually going to come through, fix the deck, get it qualified for financing, renovate the house, and then we’ll sell it from there. This is actually probably a $20,000 deck, believe it or not. These are expensive when they go second story like this. If you have an inherited house in Central Florida, you don’t have $20,000 laying around to put into it, you don’t have a whole lot of options because this thing is not really going to sell to someone who needs to get financing in order to purchase the property.

All right. I’m going to go ahead and get out of here. I’m down in the basement right now, and the power is not on. It’s dark. It’s hot in here. There’s no AC running. I’m pretty sure I just saw a rat. That’s not surprising considering how much stuff is down here and how long it’s been sitting. So, I’m going to go ahead and get out of this basement and out of this house for now. Just wanted to make sure that I came over here right away before we did anything to make this video and kind of show you what a house looks like right when we purchase it before we’ve done any work. As you can tell, we have quite a bit of work to do on this place.

All right, guys. Like I said, I’m going to go ahead and get out of here. I’ve got other houses to check on. Like I said, if you have a house that you inherited in Central Florida, we’ll pay you cash for it. We’ll buy it as is. You won’t have to make any repairs and especially if you’re out of state. It’s really tough on people who are out of state who inherit houses in Central Florida. They either have to drive a thousand miles or even more to get down here to clean up the house or to make repairs, or they’ve got to hop on a plane, take time off work, hop on a plane, come get a rental car, come down here and full with this when we can just purchase it for cash, and you don’t have to deal with any of that.

Now, in certain cases like this where we can actually buy the property before it goes through probate, you’re actually going to save the time and expense of maintaining the property while the house is in probate, so things like mortgage payments. This house had two mortgage payments, and we took over their payments. Like I said, we cashed them out. They’re done with the house. They didn’t have to wait the three, six, maybe nine months for it to go through probate while making those mortgage payments the whole time, things like taxes and insurance, things like keeping the utilities on, keeping the AC running so that everything doesn’t get too hot and humid and ruin the inside of the house, things like lawn care. A lot of people kill themselves trying to drive several hours to mow the grass at a property that they inherited. In Florida, you have to mow it pretty much every week, or it’s going to get out of control.

Then, you run into things like the HOA. It gets on you because the grass is too long. The code enforcement comes out, and you start running into problems like that. So, just give us a call. Submit the information on our website if you have a house to sell in Central Florida, if you inherited a house in Central Florida. This one happens to be in Tavares, but we do buy all over Central Florida. So, submit your information, and we’ll see if we can help you out with it.